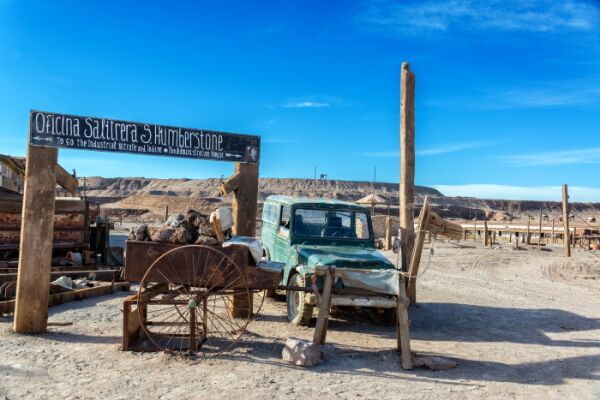 The Humberstone and Santa Laura saltpetre works are located in the Atacama Desert in northern Chile, 48 km from the city of Iquique in the Tarapacá region. It is in this arid environment that the largest amount of saltpeter in the world has been extracted. Both plants, which are 1.5 km apart, have a similar history, linked to the mining of the so-called “white gold” since the last quarter of the 19th century. Until the discovery of ammonia synthesis, saltpetre was a lucrative mining product. In 1961, however, the saltpetre works were finally closed, the houses and the infrastructure were abandoned.

Today, these ancient saltpetre works are a Chilean national monument and have been part of the UNESCO World Cultural Heritage since 2005.

As industrial ruins with a ghost town, Humberstone and Santa Laura are one of the most important tourist attractions in the Tarapacá region of Chile. 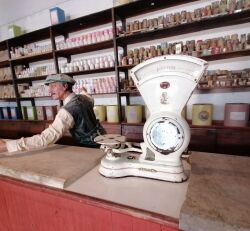 It is impressive to see the remains of a rich era. The organisation Corporación Museo del Salitre has also carried out restoration work together with the regional government of Tarapacá, renovating some of the most important rooms in the ghost town. This allows the visitor to vividly visualise the life of the place at that time, such as the scene re-created in the photo of a “pulperia”, a typical name for mixed-goods shops in South America at that time.

Remains of a saltpeter refinery in the ghost town of Santa Laura, Chile

For more details on a visit to the saltpetre works
please send an e-mail to info@travelart.com.